The Latest News at Kingswood

There is the latest news from Kingswood Bowling Club, we will try and update this page on a weekly basis. If you would like to submit a report to be included here, please CLICK HERE and it will be included in the next update of this page.

The sun shone for the opening of the Ladies Section on Tuesday, 17th April. President Audrey Wark welcomed representatives from the GWBA and the East Ren LBA, ladies from neighbouring clubs, her special guests and all our members. The first jack was thrown and President Audrey then delivered two bowls with cheers from all the spectators.

An organised game took place with the winning triple being Liz Tait, Linda Hislop and Helen McMurdo. VP Liz Wood got the prize for the first toucher setting a high standard for the other players.

The afternoon was rounded off with a generous tea. 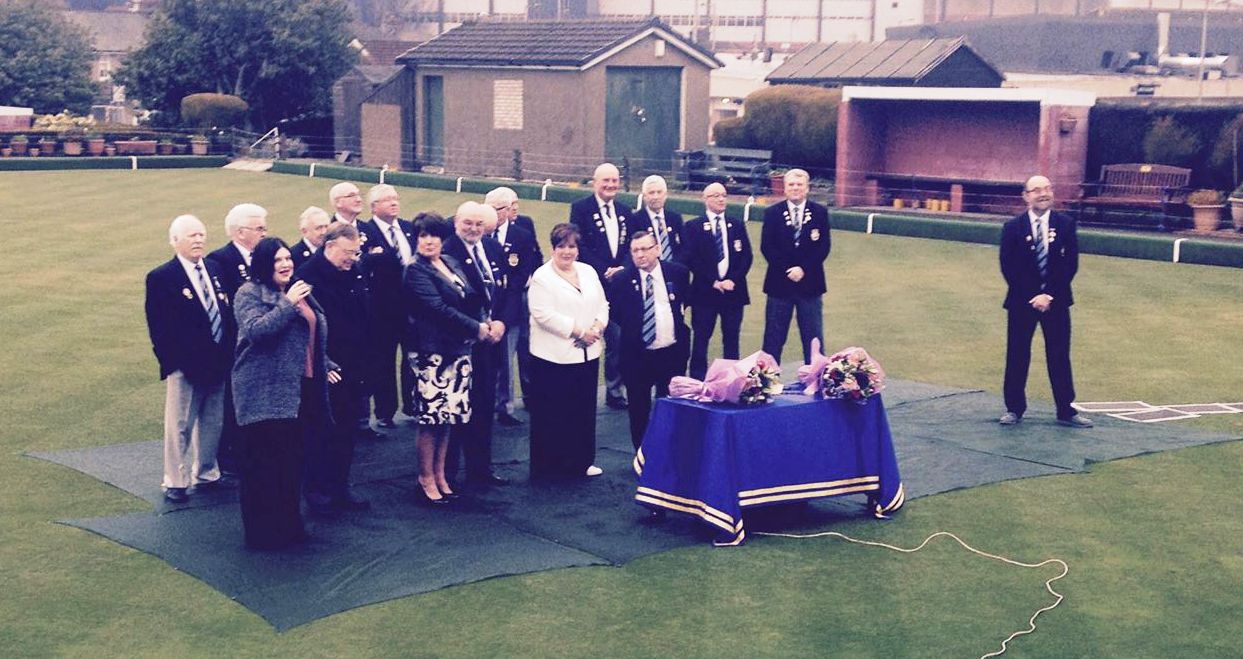 On Friday 13th April, Kingswood Bowling Club officially opened for the 2018 Season. On the green (starting from left to right) was Councillor Susan Aitken, Honorary President Kennedy Greig, Joanne Bellshaw and Vice President Alan Bellshaw, Liz McGinty and President Robert McGinty plus the Secretary Mike George, the back row was made up of the Past Presidents. Liz delivered the traditional silver jack and the first two bowls and once the greens were declared open Immediate Past President Rod Harvey raised the Kingswood flag.

After the greens opening, the party made its way back into the Clubhouse for the evening.

David Greig is once again organising a leaflet drop in Kingspark area to get new members into the Club. The leaflets will be ready next Saturday 7th March for delivery during the next week with the Membership days being on Saturday 21st and Sunday 22nd April. So if you can help, please contact David on 07870764482 with which streets you can do in the drive.

The funeral arrangements for Jack Fearon who died on Monday were announced today. The funeral will be held on Wednesday 14th March at 10.00pm at Christ of Kings Chapel on Carmunnock Road, then to the Linn for approx. 11.00pm and then returning to Kingswood.

The funeral arrangements for Jack Fearon who died on Monday were announced today. The funeral will be held on Wednesday 14th March at 10.00pm at Christ of Kings Chapel on Carmunnock Road, then to the Linn for approx. 11.00pm and then returning to Kingswood.

Present Robert McGinty open the reconvened 2018 Kingswood AGM and thank those members who had come out tonight in the miserable weather conditions.

He once again asked for a nomination from the floor for the position of Treasurer and once again there was a deathly silence from the body of the hall.

The Secretary spoke the meeting and said he was extremely disappointed that out of a 160 odd full members, we cannot get one person nominated as our Treasurer. R Finlay then spoke and echoed these comments, he though it was an embarrassing state of affairs for a club this size.

P Alexander spoke and said he would take on the position but was not computer literate, the position of Treasurer requires the ability to use a computer as much of the work is done online.

Vice President I Kyle then spoke to the meeting and said he was willing to stand down as VP and take on the position of Treasurer. This was proposed by President R McGinty and Seconded by Past President R Harvey. I Kyle was therefore the new Treasurer for Kingswood.

The rest of the business for the AGM was concluded and a vote of thanks was proposed by Honorary President R K Greig to both President R McGinty and Past President R Harvey for their handling of both meetings.

The funeral arrangements for John Fenwick are Tuesday 27th February 2018, 4.00pm at the Linn and then to Kings Park Hotel.

President Helen McGregor welcomed everyone to the AGM. Thirty-seven ladies attended the meeting.

President Helen then asked everyone to be upstanding and to observe one minute’s silence in remembrance and respect of Hon. President Eveline Kelly and former members Liz Baxter and Helen Riddle who had passed away since our last AGM.

The minutes of the previous AGM were taken as read, as were the Secretary’s report, the treasurer’s report, the Auditor’s report and the Match Secretary’s report. President Helen gave her retiring speech thanking all the office bearers, her ladies committee and the match committee for all their hard work throughout her two years as President. She also thanked Gordon Elwood and Andy Johnson for all the work they put in renovating the ladies’ locker room.

Match Secretary Sheila thanked her committee for their continued support and informed the body of the hall about the few changes made by the various Associations.

President Audrey welcomed a new member Ann Dunn to the club and also welcomed Ann Stevenson on to the Ladies Committee.

President Audrey informed the meeting that, due to the lack of a club Treasurer, the fees have not yet been fixed, but that the proposal is that there will be no increase. She also gave dates for a fashion show and also the coffee morning.

As there were no other matters raised, President Audrey closed the meeting.

The Annual General Meeting was started on Monday 19th February, with President Rod Harvey welcoming the Members. Everything was going great with the Minutes, Secretary's Report and Treasurer's Report all being accepted by the members. Our new President Bobby McGinty was installed and the new Vice President Ian Kyle accepted.

Then we came to the crunch section, election of the Club's Office Bearers. Everyone was elected, with Charlie Boyle taking on the Seniors. Then we came to the Treasurer. Bobby Finlay has stood in since September and we are all grateful to him. But we need a solution. The President asked for nominations from the floor and with none forthcoming, Hon President proposed a 15 minute break and this was seconded by R Finlay. Returning to the meeting the President once again asked for a nomination from the floor and again the silence was deafening.

As we cannot operate without a Treasurer, the President had no option but to suspend the meeting until Sunday 4th March 2018 at 7.00pm.

It was announced this morning the sad news that long time Kingswood Member, John Fenwick had died during the night. Details of the funeral will be Posted when they are known. The thoughts and prayers of the Kingswood Members go out to the family.